Juniors include Science and Maths in their Aistear themes. Here they are exploring the theme of Outer Space as part of Space Week 2017! 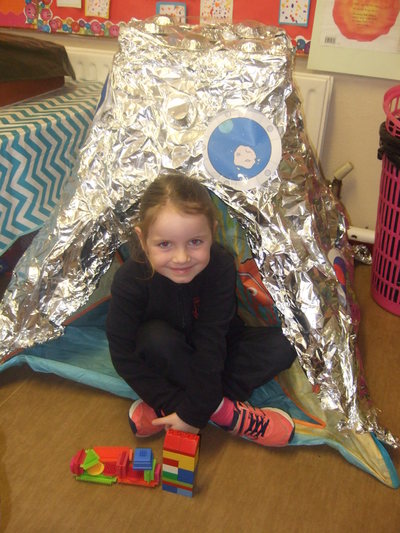 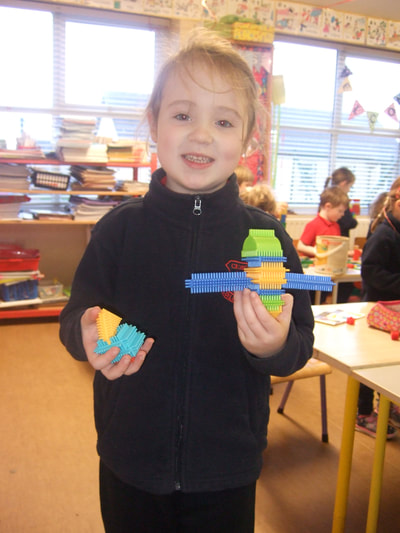 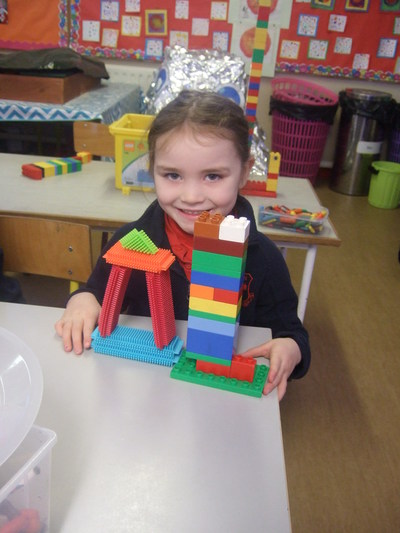 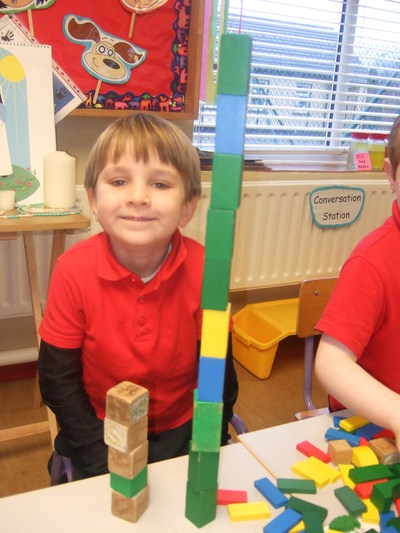 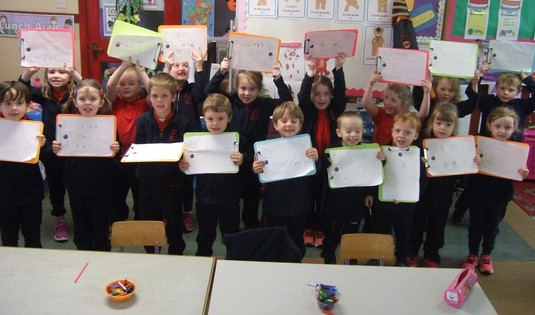 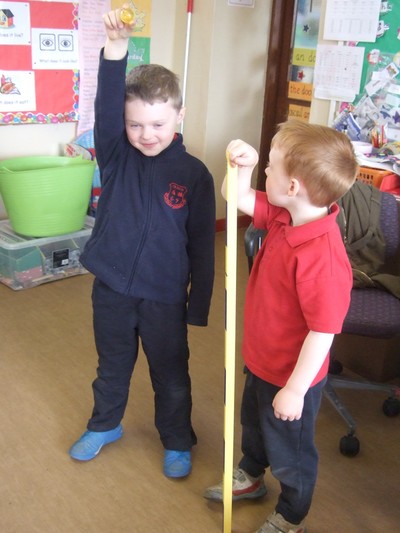 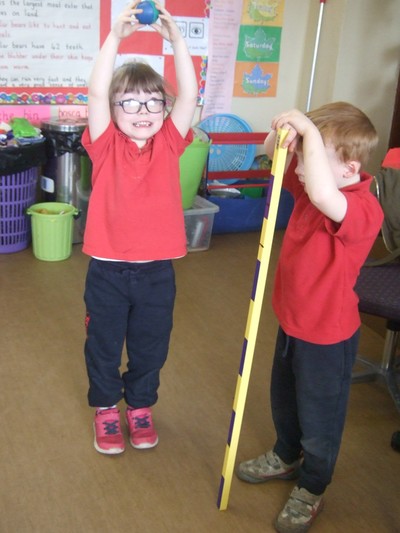 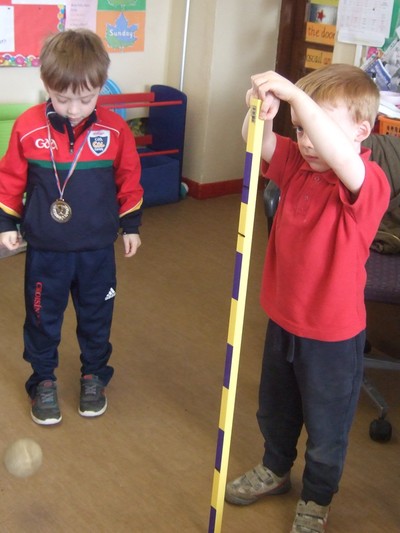 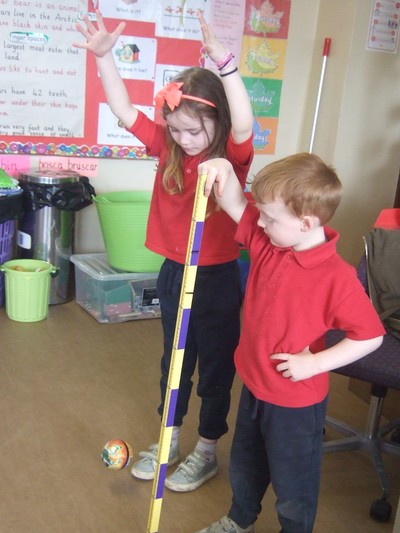 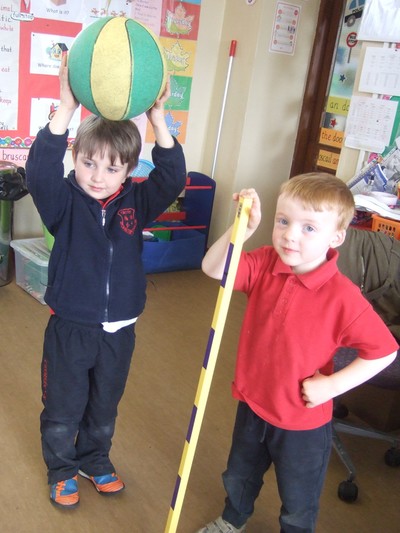 Materials: Properties and characteristics of Materials

Junior Infants decided to investigate different types of balls to see which one was the bounciest. There was a large selection of balls in our classroom and in the shed. We decided to use a soccer ball, a basketball, a sponge ball, a juggling ball, a Toy –Story plastic ball and a ping pong ball.

We used a metre stick to measure how high the ball bounced.

We then carried out our investigation. We discussed how to make the investigation a fair test. We chose to drop the ball from the top of the metre stick each time. We also made sure that we dropped the ball from our hand instead of throwing it down.
For each ball we tested, A pupil held the metre stick, individual pupils dropped the ball while others watched how high the ball bounced. Ms. Brady marked the place on the metre stick where the ball landed with a marker. We found that the metre stick was very useful as it had the Clare colours  on it (blue and yellow) so we just had to see which colour it reached.
After all of the balls had been bounced, we could see which was the bounciest.

The ball that bounced the highest was the ping pong ball. The second bounciest ball was a soccer ball, followed by the basketball, the sponge-ball and the Toy-Story ball. The juggling ball was the least bouncy. We learned that balls bounce differently depending on what material they are made of.

We linked our science investigation to Maths in a few different ways:
Shape and Space – 3D shape: We have recently learned about 3D shapes and we know that a ball is a sphere shape.
Number – Comparing and ordering: We had to put the balls in order from the bounciest to the least bouncy. We used the language of ordinal number when we were deciding which balls to test first and last.
Measures – Length: We compared the balls according to how high they bounced. 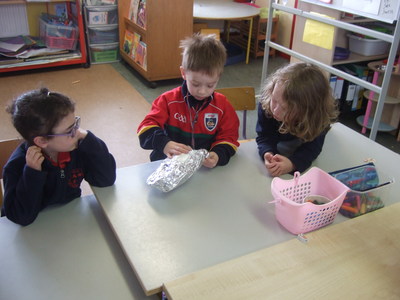 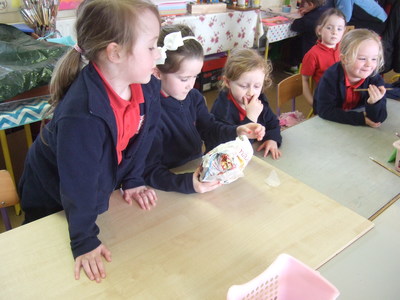 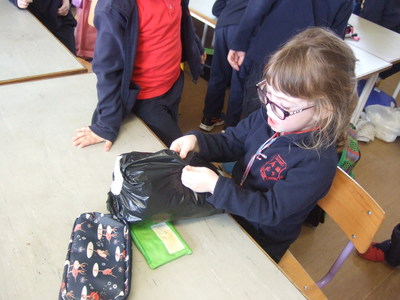 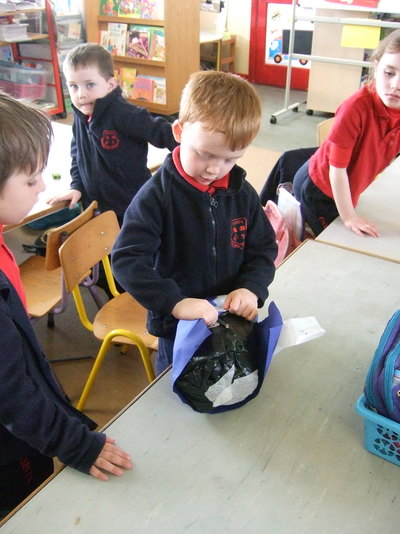 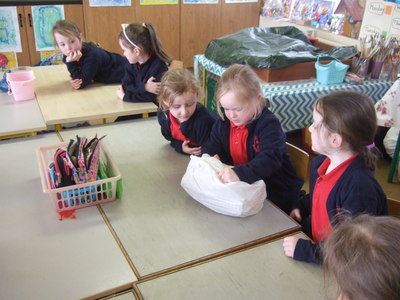 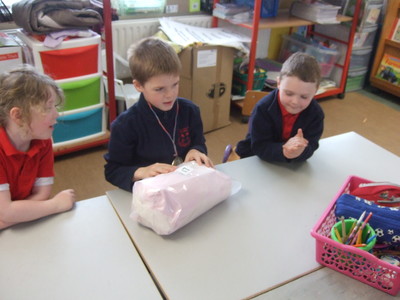 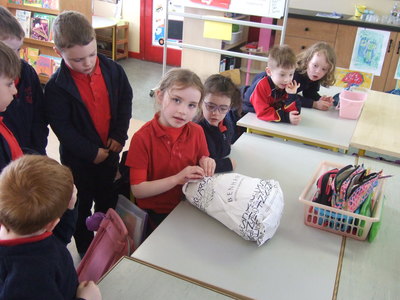 Our Investigation
We are continuing to learn about Materials.  We have been discussing materials and using words to describe items.  We have learnt words such as smooth, rough, prickly, rubbery, shiny, fluffy etc.

One day our teacher played a game of ‘Pass the Parcel’ with us. We sat around our tables and looked at the big parcel that was taken out of the very large bag.  It was wrapped in brown paper and it had a green ribbon.  We saw that there was a sticker with 20 written on the outside of the parcel.  We wondered what would happen when we opened that first layer of the parcel – would there be another sticker with a different number and maybe different packaging.  We made our predictions.

We then began our investigation.  The music played on the computer and we passed around the parcel. When the music stopped, the person holding the parcel looked at it and described the material used. They described the colour and the texture. Then they saw that there was a little prize inside for them to keep. We named each prize and linked it to our Maths work on Shape and Space, Colours, Counting, Length etc.  When the music began once more the parcel was passed around again. This continued until everyone got a turn.

We found out that as we opened the layers of the parcel, there was a different material making up each layer.  We also realised that the parcel was getting smaller and that the numbers on each sticker were getting smaller too as it went around the room.

We linked this activity with our Maths work.
Strand: Number- Counting –
Strand: Space and Shape – 3d Shapes
Each parcel was numbered from 20-1 and we counted down as we opened each layer. Many of the objects between the layers were 2D and 3D shapes for example. the pencil is a cylinder and the ball is a sphere (both cylinder and sphere can roll). We also found out that the ruler can make straight lines and the odd- shaped erasers were able to link together.

We really enjoyed discovering all about different Materials and especially playing the ‘Pass the Parcel’ game! 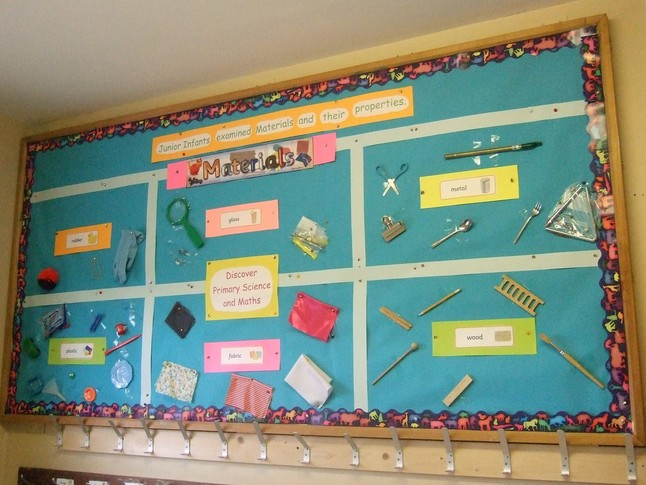 The Junior Infants categorised lots of materials using some everyday objects. It was fun locating the materials from around our classroom.  We linked this Science with our Maths - We counted the items in each category both in English and in Irish!
We hope you enjoyed reading our submission
Powered by